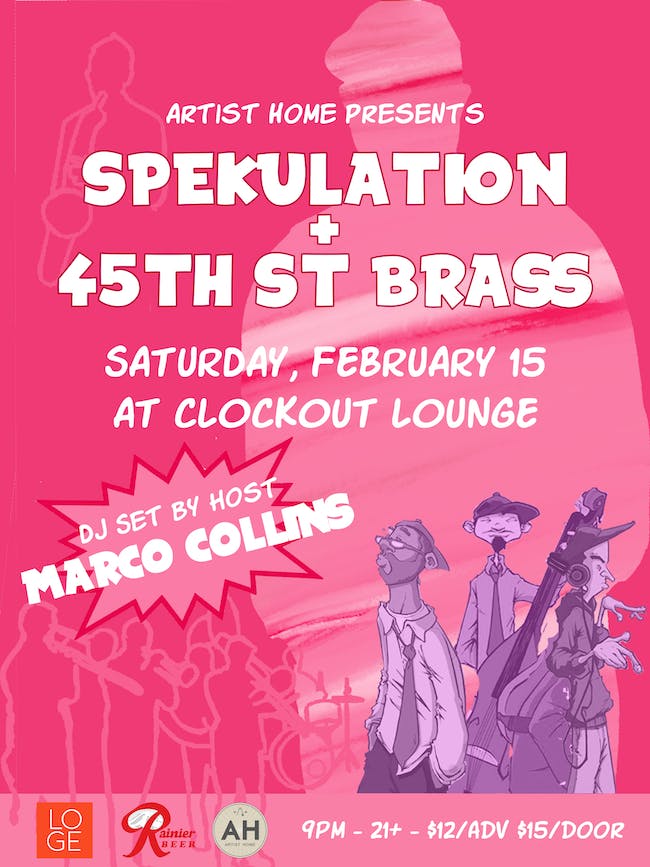 Spekulation is a Seattle-based emcee and producer who blends samples with live instrumentation to create hiphop records that represent Seattle’s deep and diverse music culture. In the past few years he has released several EPs, been played on KUBE, KISS and KEXP, and scored a short film featuring some of the world’s top dancers which was featured in The New York Times and Washington Post. On stage, he performs with DJ AbsoluteMadman, Nate Omdal and an 8-piece band, bringing together some of the city’s most talented instrumentalists.

In early 2014, Spekulation remixed the now-infamous “Bout That Action” Marshawn Lynch interview, and the track went viral, garnering 250,000 plays in the first week, and was featured on NFL Network and Fox Sports. Pitchfork devoted an article to the remix, writing, “No joke, this is probably the best song I’ve heard in 2014″. A few months later Spekulation released the single and video, "Home Of The Mighty", the Seattle anthem that earned him a place on the list of Seattle Magazine's top hiphop artists. He has spent the last year producing songs for other Seattle artists, and putting the finishing touches on his debut full-length album, Nine to Fives & Afterlives, due out on June 20, 2016.

Spekulation’s live show has grown in size this past year, adding a string section to complement the existing horns, rhythm section and DJ. Bassist and composer, Nate Omdal from Seattle Jazz Composers Ensemble, arranges all of the live instrumentation, and together they craft a booming and energetic live performance.

We are Trevor Parrish on trumpet, Dave Marriott on trombone, Peter Daniel on saxophones, Nelson Bell on sousaphone, Matthew Goodin on drums and Annie Jantzer singing up front.

It looks like a brass band, but it doesn’t quite sound like you’d expect. Mix in a little jazz, funk, some soul and hip hop, and what comes out is a powerful horn and groove driven sonic experience that will make you shake your booty. Over the years, 45th St Brass has been made up of some of the best horn section players in the northwest. Fronted by the “electrifying vocals” of Annie J, 45th St Brass has a wholly unique sound and broad appeal

With a special guest DJ set by KEXP's Marco Collins!