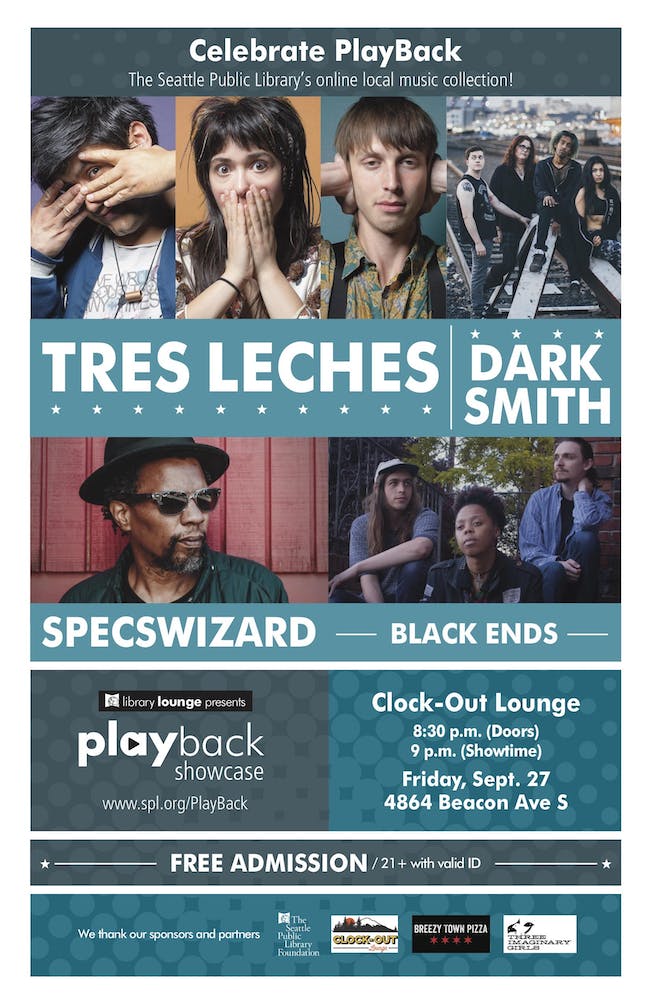 Tres Leches is a self-proclaimed dark-basement art rock band with deep roots in the Seattle community going back at least a decade. Their new album “Amorfo” finds itself reviewed in The Big Take Over, The Seattle Times, The Stranger, Seattle Met and more. The album name, “Amorfo” translates to “Amorphous”, which the band believes represents the nature of expression and the endless possibilities that come from the vulnerability they share in their writing process.

Specswizard was born and raised in Seattle and has been involved in Hip Hop music and art for four decades. He has recorded many albums that have gone somewhat under the radar. Some examples: Return of the Artist, The Long Awaited Mega ep, Original Space Neighbors, Golden Eagle, Cool Mike the Untold Story, Unfollow and the recent Blakwizard, a collaboration with Silas Blak.

DARK SMITH is a four-piece dreampunk outfit made up of Seattle musicians from various backgrounds, described by The Seattle Times as "swirling with hints of shoegaze, post-punk and dissatisfaction with the status quo." Following their debut EP Prehysteria, the band released their first full-length Degressive in 2019, described by KEXP as "goth-tinged post-punk with buzzing angular guitars" and by Afropunk as "thick with heavy atmosphere, anthemic vocals and massive drums".

Black Ends is a gunk pop musical trio from Seattle. They fully formed in August 2018 and released their debut EP Sellout in March of this year. The guitars are like wind chimes and the band is the air helping them sing."