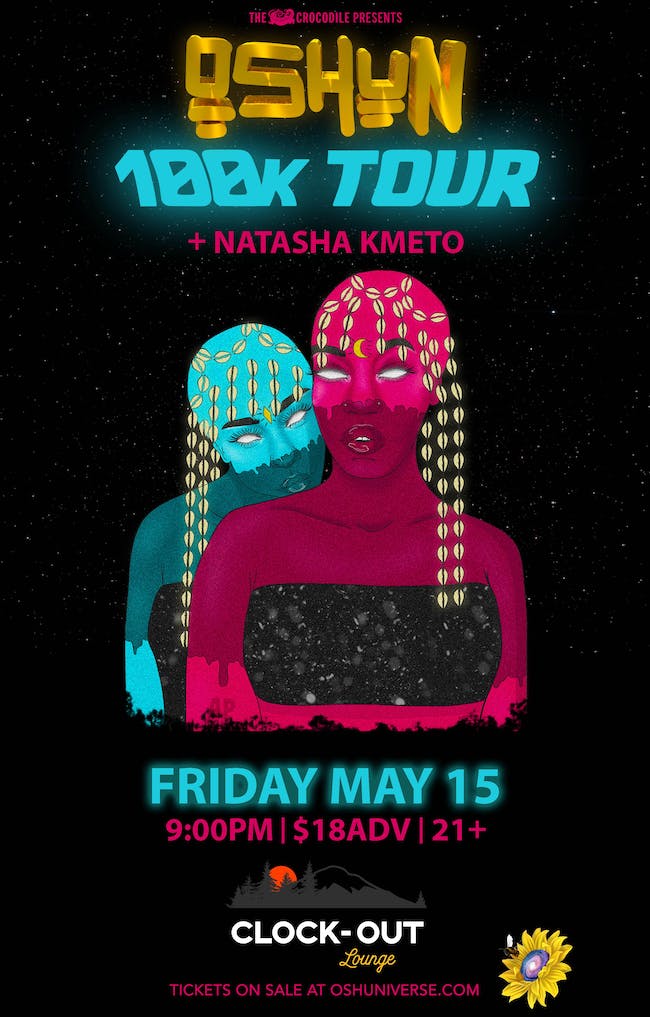 OSHUN is an independent Hip-Hop / Soul duo and the sonic manifestation of Afrofuturism. Using digital and acoustic sounds, heavy drums and bass, and ambient harmonic textures, OSHUN connects with the spirit of their ancestors to manifest a sweeter tomorrow for us all.

Since the release of their debut mixtape ASASE YAA in 2015, OSHUN has amassed a social following of over 150k people between Youtube (youtube.com/oshun), Instagram (@oshun), and Facebook (facebook.com/oshuniverse) alone. They’ve been recognized by media heavy hitters such as Billboard, Rolling Stone, The FADER, Viceland, Huffington Post, NPR, Essence, and Vogue (just to name a few). They've also performed throughout the U.S. and Brazil all while remaining full-time college students at NYU.

It’s been a wonderful journey and now that these young goddesses have graduated college, they are transitioning into the next phase of manifesting their purpose.

Natasha Kmeto is a multi-instrumentalist, vocalist, and producer from Portland, OR. Kmeto weaves dreamy dancefloor hits with influences from soul, R&B, electronic music, and pop. Her songs are emotional, honest, and open in their sharp lyricism, over fierce, dynamic rhythms and beats that keep dancefloors pulsing. Natasha Kmeto controls the dancehall from the stage, utilizing an electronic toolkit she has developed over the years.

Natasha Kmeto’s music deals with the timely message of living in today’s world as a queer woman. Over the years, Kmeto has embraced her identity wholly, interweaving the struggles but also the pleasures of her life into her songs. By telling her personal story, Kmeto brings listeners into her world and elevates the important voices of the LGBTQ community.

It is because of her honesty and incredible talent that Kmeto’s music has received critical acclaim over the years. Natasha Kmeto has toured internationally, playing stages across the US, Europe and Canada. She has been the supporting act on national tours with TV on the Radio and Ghostly International artists, Beacon. Performances at major festivals include Coachella, Bumbershoot, MusicfestNW, Treefort Festival, SXSW, Symbiosis, Low End Theory, Le Guess Who, and Decibel Festival. Other notable performances also include sharing the stage with Four Tet, Squarepusher, Flying Lotus, Emancipator, Shabazz Palaces, Roisin Murphy, Jimmy Edgar, Machinedrum, and Shlomo. Kmeto’s music has been featured by NPR, Pitchfork, Spin, Fader, Resident Advisor and Rookie. She has played live performances over the air on Boiler Room and KEXP, and her tracks have been played by numerous DJs including the legendary tastemaker, Mary Ann Hobbes.